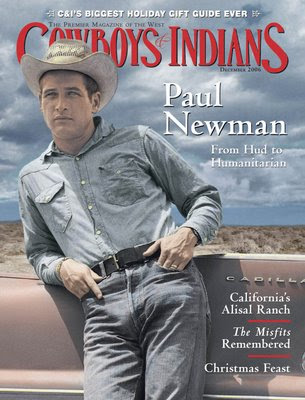 If you’re going to introduce a younger movie buff to the unique charisma of the extraordinary Paul Newman – well, where do you begin? After all, you’re talking about a superstar who was active on screen over six decades. Here are some suggested movies to use while tutoring the uninitiated.

HUD (1963) – As an anti-heroic heel in Martin Ritt’s anti-Western, Newman is a smolderingly sexy hunk who defies his tradition-bound father (Melvyn Douglas) and disillusions his admiring nephew (Brandon de Wilde) while selfishly looking out for No. 1.
HARPER (1966) -- Newman's self-assured star power has seldom been showcased as effectively as it is in this slick private-eye drama based on Ross Macdonald's The Moving Target. As Lew Harper (the detective known as Lew Archer in Macdonald's great series of crime novels), Newman cracks wise and dodges bullets with all the cynical élan of a classic movie shamus. (A somewhat lesser sequel, 1976’s The Downing Pool, is not without its charms.)
COOL HAND LUKE (1967) -- This is the one that solidified Newman's status as a pop-culture icon of the 1960s. As a rebellious chain-gang prisoner who destroys himself while becoming a legend in the eyes of other inmates (including Dennis Hopper, Harry Dean Stanton and Oscar-winner George Kennedy), he combines anarchy, nobility and plain old cussedness in just the right measures. Little wonder that a frustrated warden (the late, great Strother Martin) complains: ''What we got here is failure to communicate!”
BUTCH CASSIDY AND THE SUNDANCE KID (1969) -- Newman and Robert Redford make the best pair of big-screen buddies since Clark Gable and Spencer Tracy in this tongue-in-cheeky Western written by William Goldman (who also scripted Harper) and directed by George Roy Hill (who would later guide Newman and Redford through the stylish con-artistry of The Sting).
SLAP SHOT (1977) – Rude and crude with apologies to no one, George Roy Hill’s profanely funny comedy about the misadventures of a third-rate, bush-league hockey team remains a much-quoted favorite of sports-talk radio hosts everywhere. Look beyond the surface hilarity, however, and you’ll better appreciate Newman’s risky and frisky performance as a middle-aged player-coach whose desperation mounts as he become increasingly aware that he won’t have much left when he hangs up his skates.
THE VERDICT (1982) -- Sidney Lumet directed, and David Mamet wrote, this brooding courtroom drama about a malpractice case that brings out the best in an unlikely hero. Newman's masterful portrayal of a boozy, burnt-out lawyer who gets a shot at redemption ranks with his finest work as an actor.
BLAZE (1989) -- Written and directed by Ron Shelton, who also gave us the equally robust Bull Durham, Blaze is a riotously funny and rigorously earthy romantic comedy about life, love and the pursuit of political mandates. Newman gives a big, boldly flamboyant performance as Earl K. Long, the three-term Louisiana governor who infamously romanced Blaze Starr (Lolita Davidovich), a spectacularly endowed Bourbon Street stripper known affectionately as ''Miss Spontaneous Combustion.''
NOBODY’S FOOL (1995) – Everyone has a favorite Paul Newman performance. But if you’re going to choose his very best performance, you’ll be hard-pressed to name one better than his Oscar-nominated turn in this quietly superb comedy-drama from writer-director Robert Benton (Places in the Heart). Based on the well-received novel by Richard Russo, Nobody's Fool is the story of Sully (Newman), an aimless and amiably impoverished construction worker with a banged-up knee, a who-cares attitude and a scolding landlady named Miss Beryl (Jessica Tandy). At age 60, however, Sully finds himself, much to his amazement, on the verge of finally becoming a responsible adult. Like just about everything else in his life, it just happens, without warning, and Sully has to deal with it.
Posted by Joe Leydon at 9/27/2008 09:40:00 AM

There are a couple of these that I've never seen, but I will be seeking them out. Thanks for posting this list.
He was a class act. The world is poorer without him in it.

"I don't know how to swim"
"You fool - the fall will probably kill you."