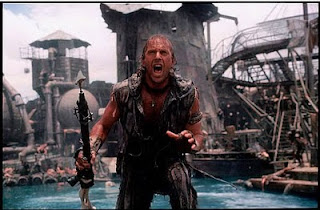 Who can save us from ecological catastrophe? Would you believe... Kevin Costner? Seriously: According to the New York Daily News, Costner "has invented a device that cleans oil from sea water." And British Petroleum -- which, let's face it, is getting pretty freakin' desperate at this point -- gave the OK yesterday to test six of Costner's devices "after the Army Corps of Engineers gave the machine a thumb's up."

But wait, there's more: "Costner's $24 million centrifuge machine has a Los Angeles-perfect name, 'Ocean Therapy.' Placed on a barge, it sucks in oily water, separates out the oil and spits back clean water." And believe it or not: Costner "started paying a team of scientists millions to create the device" back in 1995 while working on -- yes, you guessed it -- Waterworld

Hey, whatever works. I've always been a Costner fan. (Not only do I think his performance in Mr. Brooks was criminally under-rated -- I've even had nice things to say, and write, about The Postman

.)  And if he can save my home state of Louisiana (among other places) from this disaster, I will gladly buy him dinner at the New Orleans restaurant of his choosing. No kidding.
Posted by Joe Leydon at 5/20/2010 11:31:00 AM

And I'll pay for dessert!

I'm not a Costner fan, but this could change my mind!

Where is Penn, Pitt, Jolie, and Klooney. Do they not care about the gulf coast states and region and what about the animals?

They are all hypocrits. They are all scared to say anything against Obama. We do not have time our country and future are at risk. By a hypocrit or stand up for what is right.