I ♥ Tucker: The Man and His Dream at Museum of Fine Arts, Houston 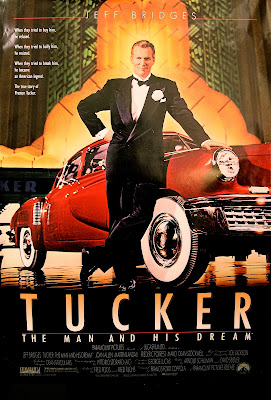 During the upcoming second weekend of We ♥ Jeff Bridges, the retrospective co-sponsored by the Museum of Fine Arts, Houston, and the Houston Film Critics Society, it'll be my great pleasure and honor to introduce Francis Coppola's  Tucker: The Man and His Dream

at 7 p.m. Friday at MFA. As I noted in my original 1988 review, Tucker is "a great American movie about great American dreamers." The movie "is not so much a biography as a celebration of Preston Tucker, the innovative automobile designer of the 1940s who dared challenge the supremacy of Detroit's Big Three with ''The car of tomorrow -- today!'' His car, in Coppola's view, was ''built too good,'' so, of course, Tucker had to be defeated. But he could not be destroyed...

"By all rights, Tucker should be a tragedy. But the movie, brimming with brash vigor and bursting with all-American pride, is bigger than one man's collision with the forces of greed. Coppola has borrowed a few well-selected pages from the handbook of director Frank Capra, another American visionary, who demonstrated in such classics as Mr. Smith Goes to Washington

and It's a Wonderful Life

how to snatch a moral victory from the immoral overlords of The Establishment. Tucker is at heart an ode to American ingenuity, displaying a patriotism more unabashedly exhilarating than all the flag-waving at a dozen political conventions."

Not surprisingly, Coppola -- and producer George Lucas -- pretty much agreed with my take on the film when I interviewed them back in 1988.