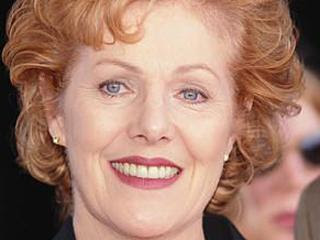 As The Associated Press duly noted in its obit, Lynn Redgrave – who passed away Sunday in Manhattan at age 67 -- “never quite managed the acclaim -- or notoriety -- of elder sibling Vanessa Redgrave…” But never mind: For the better part of a half-century, she added more than her fair share of luster to the illustrious family tradition of an esteemed British acting dynasty.

During the 1960s, in movies widely acclaimed (Georgy Girl

, for which she received an Oscar nomination and a Golden Globe Award for Best Actress) and unjustly neglected (Smashing Time

, in which she and Rita Tushingham played small-town lasses who took Swinging London by storm), she earned rave reviews and attained international stardom by playing conspicuously unglamorous and often rough-hewn characters with enough unaffected vivacity to make their extremes of joy and heartbreak instantly and easily relatable. Gangly and gregarious, she wasn’t conventionally attractive – not an ugly duckling, mind you, but not exactly a graceful swan, either. Yet that didn’t matter. In fact, her plumpishness was a major part of her well-nigh irresistible charm.

Lynn Redgrave invaded America as part of the ‘60s British Invasion, that same pop-cultural tsunami that brought us The Beatles, Michael Caine and shagadelic supermodels. How a big a star was she during this period? Well, consider this: She had just a tiny part – no more than one scene, actually – in The Deadly Affair

, a dark and brooding 1966 spy thriller based on a John Le Carré novel, starring James Mason, Simone Signoret and Maximilian Schell. But after the film flopped in N.Y. and L.A. during its initial U.S. theatrical release, it was sent out to many smaller markets with a drastically revamped ad campaign designed to make it look like a breezy spy-spoofy romp starring – yes, you guessed it -- "Lynn Redgrave of Georgy Girl."

During subsequent decades, she managed to slim down without ever really slowing down. (She was, no kidding, a prominent spokesperson for Weight Watchers during the ‘80s.) On stages throughout the world, she triumphed in everything from Shaw’s Saint Joan to Shakespeare’s Twelfth Night. Her movie credits increased to encompass everything from the sublime (Shine

) to the ridiculous (The Happy Hooker

, Morgan Stewart’s Coming Home) to the stupefyingly bizarre (The Last of the Mobile Hot Shots

, Sidney Lumet’s legendarily ill-conceived but guilty-pleasurably campy 1970 adaptation of Tennessee Williams’ The Seven Descents of Myrtle). And much like siblings Vanessa and Corin Redgrave, she established ties with Houston’s Alley Theatre: In 1994, she graced the Alley stage in Shakespeare for My Father, the one-woman show she performed as a tribute to her actor dad, Sir Michael Redgrave.

In recent years, she was plagued by health issues – she was treated for breast cancer in 2003 – and personal tragedies. (Her niece Natasha Richardson died after a skiing accident last year; last month, her brother Corin passed away.) But she remained active in movies and TV as late as last year, when she fleetingly appeared in Confessions of a Shopaholic

, and guest-starred in episodes of Ugly Betty and Law and Order: Criminal Intent.

And yet, despite the variety of her work and longevity of her career, Lynn Redgrave will always be most fondly remembered by some an emblematic icon of ‘60s British cinema. So much so, in fact, that when filmmaker Randal Kleiser (Grease

) made Getting It Right

, a 1989 dream project he crafted as his valentine to movies of the Swinging London era, he eagerly cast Lynn Redgrave as a sultry “older woman,” a trendy socialite who seduces the virginal young hero with all the intense, nimble-witted enthusiasm of someone pursuing a stimulating after-dinner conversation. It should be noted that Redgrave had a nude scene in the lightly delightful romantic comedy. It should also be noted that she looked pretty smokin’ hot. She had come a long way from Georgy Girl. But she remained, as ever, a formidable screen presence.
Posted by Joe Leydon at 5/03/2010 03:28:00 PM