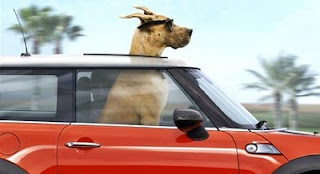 The deficiency of fart jokes -- only two, actually -- doubtless will disappoint adolescent boys, and the novelty of Owen Wilson providing a California stoner-style voice for the title character, a humongous Great Dane, wears thin after 15 minutes or so. But Marmaduke still might end up fetching a tidy sum at the summer box office, given the relative lack of live-action, kid-centric fare currently available at megaplexes. Freely adapted from the long-running syndicated comic created by Brad Anderson and Phil Leeming, this uninspired comedy relies heavily on CGI trickery and aptly cast vocal talents for a multitude of gags involving anthropomorphic shenanigans. Clueless "two-leggers" remain totally oblivious as their canines -- and an impudent cat voiced by George Lopez -- freely converse with one another. That's the central gimmick, and helmer Tom Dey (Failure to Launch

) milks it for all it's worth, then continues milking, like a dairy farmer desperate to make the mortgage.