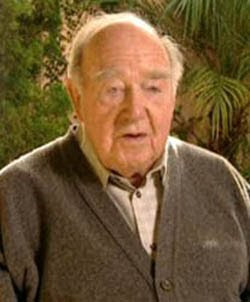 Ronald Neame enjoyed a lengthy and productive career in filmmaking by applying the sort of unassuming, old-school professionalism that, alas, often isn't fully appreciated during a professional's lifetime.

(1929), Alfred Hitchcock'a first talkie, then went on to collaborate with David Lean as cinematographer, producer and/or co-scriptwriter on such '40s classics as Brief Encounter

. (Quite the renaissance man, he also earned an Oscar nomination for special effects work on 1942's One of Our Aircraft is Missing

.) As a director, he was justly proud of his subtly masterful work on Tunes of Glory

(a cheeky 1966 caper with Michael Caine and Shirley MacLaine that, unfortunately, people keep threatening to remake), Prudence and the Pill (1968) and Hopscotch

It was during an L.A. junket for the latter film that I had one my one and only chance to briefly chat with Neame, whom I found to be a courtly and loquacious gentlemen with a gift for dryly self-deprecating humor. Yes, he agreed, he had a lot to answer for after helping start the "disaster movie" cycle of the '70s with his enormously popular The Poseidon Adventure

. But, then again, directing that movie made him financially independent, so he couldn't really find it in his heart to actually apologize for the film. (Of course, he likely was amused more than two decades later when two different sets of filmmakers couldn't do any better -- and, indeed, actually fared much worse -- with their ill-starred remakes of Poseidon as feature

To give you some idea of Neame's diversity: He directed Maggie Smith's Oscar-winning turn in The Prime of Miss Jean Brodie

(1969), Judy Garland's final film performance in I Could Go on Singing

(1963), and Albert Finney's portrayal of a singing Dickensian skinflint in Scrooge

(1970). He also directed A Man Could Get Killed (1966), a semi-spoofy adventure flick best remembered as the movie that introduced the song "Strangers in the Night," and Meteor

(1979), a campy sci-fi drama that pitted Sean Connery and Natalie Wood against a big hunk of rock on a collision course with Earth. He was a true journeyman, and his best movies entertained millions. And many of his not-so-good movies were at the very least diverting. That's the sort of track record that defines old-school professionalism.
Posted by Joe Leydon at 6/18/2010 05:25:00 PM