Machete is back, and Fantastic Fest has got him! 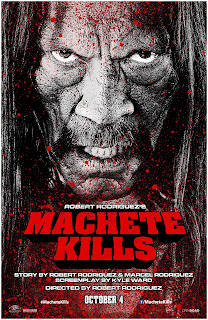 It's official: Machete Kills, Robert Rodriguez's cult-ready sequel to his exuberantly over-the-top Machete (2010) -- will have its world premiere as the opening-night attraction Sept. 19 at Fantastic Fest in Austin.

And Tim League, creative director and co-founder of the world's wildest genre-movie extravaganza, wants you to know that this is a pretty damn big deal.

"Every year we compile our dream targets for opening night film," League says. This year, "Machete Kills was at the top of that list. We are going to pull out all the stops to ensure Robert's world premiere red carpet experience is literally blood red."

The plot has something to with... with... aw, hell, just take a look at the freakin' title, for crying out loud. And if that doesn't tell you enough, take a gander at this trailer.

Just seeing the phrase, "The lovely and talented Danny Trejo," made reading this blog post worthwhile.

What a freakin' cast! This one's going on my must-see list.

Speaking of Danny Trejo...can you believe that dude is 69 and can STILL kick ALL our asses? Probably all at the same time?!

And probably not even work up a sweat while he's doing the kicking.