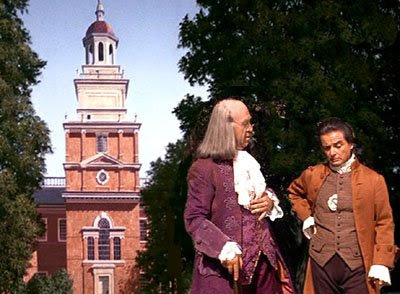 Seven years ago this week, I rediscovered 1776 on Turner Classic Movies. At 1:30 ET/12:30 CT Friday afternoon, you, too, can re-evaluate (or see for the very first time) on TCM a restored version of the movie -- one of the last Old Hollywood adaptations of a hit Broadway musical. And take it from me: Even if, like me, you were none too impressed by it back in the day, you'll find it was substantially improved by the restoration of scenes and songs that had been deleted by producer  Jack Warner  before its ’72 theatrical release. (According to Hollywood legend, no less a notable than then-President Richard Nixon "requested" the deletion of a tune that tweaked conservatives.)


As I noted in 2007: "1776 still is something less than an unadulterated masterwork. (Although director Peter H. Hunt manages some impressive wide-screen compositions, he’s a tad too literal-minded in some aspects of his stage-to-screen translation.) Taken as a whole, however, the movie is wonderfully entertaining – and, better still, undeniably inspiring -- as it offers an intelligently yet playfully romanticized account of events leading to the signing of the Declaration of Independence. But wait, there’s more: The cast includes most of the major players from the original 1969 Broadway ensemble – including William Daniels (John Adams), Howard Da Silva (Benjamin Franklin) and Ken Howard (Thomas Jefferson), all at their finest – along with an absolutely luminescent Blythe Danner (who was pregnant with Gwyneth Paltrow during filming) as Martha Jefferson. And the heated debates over individual rights and tyrannical rulers are, alas, every bit as relevant today as in 1776 or 1972." Or 2014.
Posted by Joe Leydon at 7/03/2014 07:34:00 PM