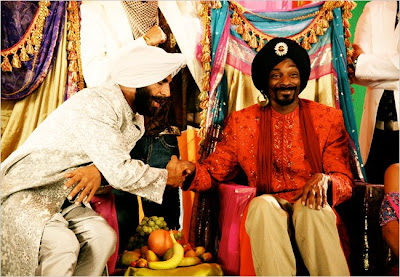 Maybe I have a pretty healthy ego -- actually, maybe an unhealthy ego -- but I can't help wondering whether the New York Times finally got around to reviewing Singh is King on Friday (even though it opened in NY on Aug. 8, the same day it opened here in Houston) only because my review of it appeared in Variety.

The funny thing is, the NY Times already had the scoop on the movie -- in its Media & Advertising section -- last month. But, obviously, the folks there over in Arts & Entertainment didn't think it was worth reviewing. Until a week later after it opened.
And I can't help wondering if, as more Bollywood movies transcend the niche-theater ghetto in the US and slip into mainstream megaplexes -- there will be more coverage of these movies in mainstream media.
BTW: True story: I saw Singh is Kinng last weekend at Houston's AMC Studio 30 -- where it played in one of the megaplex's larger auditoriums. And there was a more-than-respectable crowd there. As I left after the screening, a 40-something lady (there with her male significant other) noticed me -- yeah, I guess I kinda-sorta stood out because I was the only non-Indian in the house -- and asked: "Do you speak the language?" And I laughed, then replied: "No. But, hey, film is the universal language, right?" And she laughed. And nodded in agreement.
As Francois Truffaut once noted: "Cinema is king!"
Posted by Joe Leydon at 8/17/2008 01:26:00 AM

Email ThisBlogThis!Share to TwitterShare to FacebookShare to Pinterest
Labels: "Singh is King":