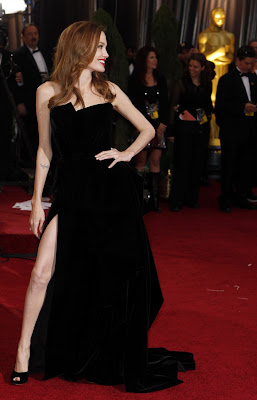 "What else would explain the magnificence of Angelina Jolie, with her streaming tresses, the two and a half hectares of scarlet lip gloss required to cover her mouth, and, most telling of all, the single, flawless leg that was permitted to emerge from the slit of her long skirt and planted cockily in full view? She was merely doling out the screenplay awards, but her pose bore a definite, don’t-fuck-with-me trace of the gunslinger, and so it was, across the time zones, that a billion people sat there with their hands up: Freeze. I have seen nothing like it, in terms of the power to strike dumb and stupefy, since Jack Nicholson, introducing a tribute to Michelangelo Antonioni, showed the scene from Zabriskie Point in which a television set explodes into a thousand angry shards. That was Oscar night, 1994. Those were the days."
Posted by Joe Leydon at 2/27/2012 06:30:00 PM

Joe Leydon I want to meet you!