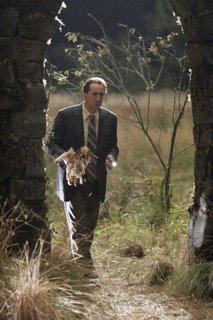 It’s difficult to pinpoint the precise moment when Neil LaBute's remake of The Wicker Man completely jumps the tracks. For some, it will be the scene where Nicolas Cage, in dire need of transportation, turns a gun on a passing bicyclist and melodramatically commands: “Step. Away. From. The Bike." For others, it will be the fight scene that ends with Cage delivering a karate kick to a feisty Leelee Sobieski. (That that, bee-yotch!) But for most, the point of no return will arrive during an extended climactic sequence that calls for Cage to pad about in a tacky bear costume. It’s so hilarious, it’s almost, well, unbearable.

As I note in my Variety review: When a major studio release with two Oscar-winning stars (Cage and Ellen Burstyn) opens without press previews, one usually assumes the distributor is trying to hide the picture from critics. But in the case of Wicker Man, which wasn't screened until 10 pm Thursday here in Houston, it's entirely possible that Warner Bros. wanted to hide a ludicrous misfire – for as long as possible, at least – from audiences as well. Much funnier by accident than many intentional comedies, it’s bound to spark outbreaks of spontaneous laughter wherever it’s exposed to paying customers. Once derisive word of mouth starts to spread, only connoisseurs of high camp and curious devotees of disasters will be queuing up at the box-office.

After writing all that, and worse, and seeing it posted online, I was prepared for a dose of vitriolic sarcasm when I received an e-mail from LaBute this afternoon. Lo and behold, however, the note was a graciously polite missive in which the writer-director acknowledged my criticism with a philosophic shrug, and encouraged me to "keep up the good work."

But you know what? I've read this note again and again, and I still can't helping thinking of Aaron Eckhart in LaBute's In the Company of Men, and Jason Patric in his Your Friends and Neighbors -- charming fellows both, until they dropped their masks. Yeah, LaBute may be all grace and good manners now. But if I look out in my backyard tomorrow, and see a towering figure constructed from wicker, well....
Posted by Joe Leydon at 9/01/2006 06:36:00 PM

Hi Joe, I meet you at SXSW this year where you chaired a function.

That said I thought I would comment on this flick you write about.

I have yet to see Wickerman but from what I can suss out from yours and other articles plus from a few peeps who have seen it... this is not the Wickerman of old.

Now it's ok to modernize and update. But from I can tell the changes also alter the 'point' of the original. And the Hollywood-it-up which also misses the point of the original.

Now is the original great filmmaking? No. But the story is gripping and errie. It builds it's tension with less-is-more. Plus how do you top a topless Ms. Eckland?

And really you never see the end until it's to late.

Perhaps Neil didn't have confidence in the original story.' All that said as for changing things I have no problem changing Christopher Lee's character to a woman. Things like that are fine.

Well I have digressed enought.

I am glad I found your blog and I shall return... You can visit my unimportant blog but I do need to update it.

The new "Wicker Man" is a vastly silly, badly acted and even badly made-up movie. What was with Cage's complexion? It was weirdly smooth and a shade not usually found outside of Swiss skin clinics which keep their own (short-lived, to be sure) herds of goats.

The original film, while very bad in several places (any scene with Britt Ekland, for example) had some conviction to it, and a great, roaring performance by Edward Woodward as the bigoted, rude cop. It even had, debuting as it did during the height of Findhorn's popularity and of books like those of Margot Adler's on the "megical revival" a certain vague, age of Aquarius-type plausibility.

But the remake is set in a sort of feminist commune, where the men are mutes and so many of the mead-swilling women resemble Betty Friedan at her most harridan-like. It just keeps getting dumber and dumber, and even my 15-ear-old daughter kept laughing at its inanities.

One mystery, however: the credits cite as source material a novel, "Ritual," by David Pinner. The original Britversion did no such thing, was famously an original screenplay by Anthony Shaffer (who produced a paperback novelization of same which I still have somewhere). So where does this book by Pinner figure in? Did LaBute somehow throw some of its plot into his his new movie?

I saw the remake this weekend and was horrified...
for all the wrong reasons.

I am a huge fan of Mr. LaBute's body of work and can't get over my disappointment. I'm perplexed. Although, 17 producers couldn't have helped matters. That's an unruly number. Too many cooks?

It is interesting to consider the possible anti-Mormon subtext in the film. Utah is the 'bee hive state' afterall. And LaBute is an ex-Latter Day Saint.

Would you care to share the e-mail from Mr. LaBute? I'm dying to make sense of the matter. Perhaps if I can read his response I might be able to recover and move on...

Thanks for sharing your thoughts.
Cheers!

I haven't seen The Wicker Man, and it isn't high on my to do list, but it should be noted that Cage took a motorbike from some dude after crashing a stolen car in The Rock.
And I am just guessing, but The Rock is probably ten times the movie that Wicker Man is...