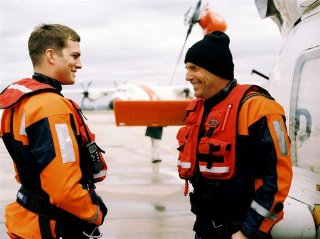 Cliches and conventions from several generations of basic-training scenarios are proficiently recycled in The Guardian, Andrew Davis' shrewdly updated version of classic (and not-so-classic) military-themed movies about grizzled, blunt-spoken vets who transform cocksure hotheads into coolly efficient professionals. With Kevin Costner well cast as a demanding mentor haunted by past failures, and Ashton Kutcher surprisingly effective as a brash recruit dealing with his own demons, the overlong but involving drama about U.S. Coast Guard Rescue Swimmers could very well turn out to be the sort of mass-appealing, four-quadrant hit that is razzed by cynical hipsters but embraced by mainstream moviegoers.

Did I enjoy it? For the most part: Yes. But, then again, I was more amused than annoyed by the film's shameless sampling of plot details and character quirks from dozens of similar dramas. As Kutcher divides his time between romancing a sexy schoolteacher (Melissa Sagemiller) during off-duty hours, and trying to prove his prowess to a cynically incredulous Costner, The Guardian is more than a little reminiscent of An Officer and a Gentleman. Indeed, the audience is practically invited to make the comparison when director Davis (still best known for The Fugitive) visually quotes the earlier film by having Costner spray Kutcher with a water hose during an especially grueling training regimen. The big difference here is, the romantic elements are scarcely more than window dressing. (Sagemiller has relatively little to do, and Sela Ward, as Costner's estranged wife, even less.) Bookended with thrilling rescue sequences enhanced with persuasive special effects, The Guardian focuses primarily, if not exclusively, on the edgy conflict between stern instructor and callow trainee. A conflict, of course, that eventually, inevitably, gives way to mutual respect.
Posted by Joe Leydon at 9/29/2006 11:11:00 PM