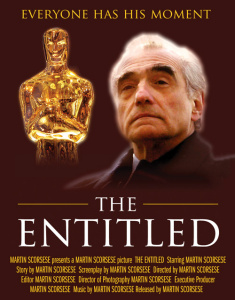 Hilarious stuff from The Onion: A sneak preview of The Entitled, Martin Scorsese's "three-hour, unabashed plea for a Best Director Oscar," coming soon to a theater near you.

"'I've been making pictures for 40 years,' said the intense, fast-talking Scorsese in an excerpt from The Entitled, during which the Rolling Stones' 'Gimme Shelter' can be heard in the background. 'For 40 years, I've been making pictures. And I've always been fascinated with the struggles a man must endure when people don't appreciate him. People say I'm the best. I didn't say it, they did. I just do my work. But for years they've been talking and you know it. You do. I deserve that award, is all I'm saying...

I'm glad you posted this.