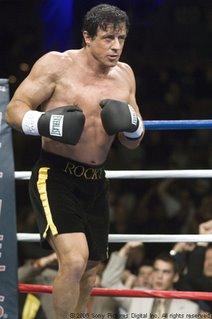 On Wednesday, I got my first look at the trailer for Rocky Balboa. Later that evening, I heard more bad news about the latest casualty figures in Iraq. Ever since experiencing that bizarre confluence, I've been thinking about something Sylvester Stallone told me in 2003 -- back when many folks thought "staying the course" was a great idea. Stallone was talking about the enduring popularity of his Rocky character. But he also wanted to say something about the global influence of made-in-America pop culture -- an influence, I now fear, may diminish as the U.S. occupation continues. The money quote:

“Something like Rocky eventually gets out of your hands and becomes bigger than you personally could ever be. I’m always taken aback by how long that character has endured. I remember, when I was watching TV coverage of the Iraq War, I saw some Iraqi in some town hold up a flag with Rocky on it. And I thought, ‘You gotta be kidding me! Where did he have this flag for the past 20 years? Under his bed?’ I mean, what was he thinking? ‘Oh, yeah, the day they come here to free us, I’m gonna pull out my Rocky flag!’?”

Alas, I fear the new anti-American sentiment stirred up by Bush and co. will be with us longer than Rocky's been on the scene.

People around the world love American culture; they just have problems with our politics. Now, though, it's going to be a lot harder for them to look past the politics. Hopefully, the recent elections will show the world that we're not totally idotic.

By the way, and off that grave subject, when I saw the Rocky Balboa preview before Casino Royale, a lot of people in the audience were laughing at it. I don't think that bodes well for the film....