Reeling in Denver, Part I: 'Breaking and Entering' 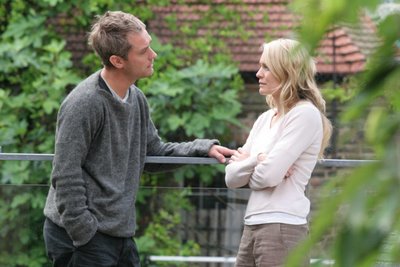 As he faced a full house on opening night at the 2006 Denver Film Festival, preparing the hundreds gathered at the Ellie Caulkins Opera House for the regional premiere of his coolly intelligent and subtly allusive Breaking and Entering, Oscar-winning filmmaker Anthony Minghella seemed – well, almost apologetic.

Hey, there he was, standing before a crowd of festive festivalgoers, about to insist upon their complete attention, and maybe even make them mildly uncomfortable, while offering a sophisticated drama that dared to be – well, dammit, coolly intelligent and subtly allusive.

“When you’re making a movie,” Minghella confessed, “you have lots of integrity. But when you get around to releasing it, you have none. And right now, I so wish I was showing you the Borat movie.”

Count me among those who are glad Minghella showed his own film instead. Because, with all due respect to the robustly vulgar comedy that has amused ticketbuyers while attracting litigators, Breaking and Entering is something more delicate and substantial, more demanding and rewarding. Days I after I saw it at Denver, it continues to return to my mind, unbidden, with ever-increasing urgency. It’s not for every taste, perhaps, but it’s certainly capable of speaking in a quiet yet insistent voice to anyone with the mind to perceive and the heart to sympathize.

Minghella’s plot, at once elliptical and precise, pivots on the burglaries of an office in the slowly-but-surely gentrifying realm of King’s Cross, a famously seedy area of North London. Will (Jude Law) and partner Sandy (Martin Freeman) are landscape architects who hope to do a little good, and make a bit of money, with grand designs for urban renewal. Unfortunately, some of the locals view the newcomers as fresh meat, not welcome saviors.

After interlopers break into their headquarters on two occasions to swipe laptops, plasma-screen monitors and other high-tech goodies, Will and Sandy decide to lie in wait for a third visit. Although he’s temporarily distracted by one of the neighborhood’s more alluring distractions – Oana, a cynically blunt-spoken Romanian hooker tartly played by Vera Farmiga -- Will spots young thief Miro (Rafi Gavron) attempting yet another looting. Will gives chase, and follows the boy to a flat in a downscale apartment complex. And then things really get complicated.

At home in his far more upscale digs, Will has been drifting apart from Liv (Robin Wright Penn), his long-time live-in girlfriend, a Scandinavian-born beauty who seems determined to test his love by seeing how close she can come to driving him away. He genuinely loves and cares for her and her 13-year-old daughter, Bea (Poppy Rogers), a semi-autistic would-be gymnast, but that’s apparently not enough to keep Liv from suspecting that, somehow, some day, he’ll take a powder. In fact, she’s so certain their days together are numbered that, deliberately or otherwise, she greases the skids for his escape route. Trouble is, the more she questions the long-range prospects for their relationship – “If you were measuring how far we are from where we need to be, would it be too far?” – the more desperately Will seeks comfort elsewhere. And the more attractive he finds Amira (Juliette Binoche), a Bosnian refugee and seamstress who just happens to be, as Will realizes early on, Miro’s mother.

In the world according to Breaking and Entering, there are no real villains. (Well, except maybe for the creep who employs Miro and other teens as break-in artists.) Even the cop determined to nail Miro (a brief but deliciously vivid cameo by Ray Winstone of Sexy Beast) is willing – no, eager – to give his prey a shot at redemption. And as for the romantic triangle at the center of the story, well, Minghella – not unlike Jean Renoir – makes it clear that everyone has his (or her) reasons.

As Will, Jude Law offers an arresting, implosive performance as a basically decent fellow who finds himself driven by the insatiable neediness of the woman he loves into an affair with another woman, and who clutches at the latter as a drowning man might grasp at a life preserver. (Much like his reasons for improving King’s Cross, his motives for embracing Amira are, too put it politely, ambiguous.) Robin Wright Penn is positively fearless in her willingness to appear borderline psychotic while traversing the vertiginous mood swings of a woman filled with so much self-loathing that she cannot accept, will not accept, that anyone could love her. And Juliette Binoche – who earned an Academy Award for her performance in Minghella’s The English Patient – is by turns hard-hearted and heart-wrenching as a displaced person whose motives and desires are charged by alternating currents of maternal instinct and carnal hunger.

Breaking and Entering – which is set to open Dec. 8 in New York and L.A. for Oscar consideration -- is a movie I want to see again, and maybe once more after that. I can’t think of many other movies this year that have evoked a similar response.

What a lovely insightful review. Minghella and Law are a class act, plus Binoche and Wright-Penn. This film is a must-see for me.