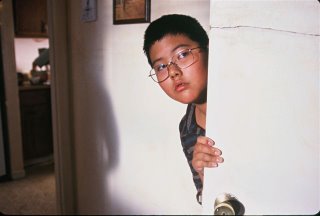 At the risk of sounding presumptuous at best, paternalistic at worst, I must confess to stirrings of pride as I see Michael Kang's The Motel listed among the five nominees in the Best First Feature category of Film Independent's Spirit Awards. I wrote one of the earliest reviews for this excellent indie when I covered it for Variety at the 2005 Sundance Film Festival. And I've been raving about it ever since to anyone willing to listen. If I helped in any small way to attract some attention for this sleeper -- which I seriously doubt, but please indulge me -- well, I'm a very happy camper indeed.

As I noted in Variety: Kang covers some familiar territory in this coming-of-age dramedy about a precocious Chinese-American youth whose family operates a sleazy roadside motel in upstate New York. But Kang manages to stake his own claim to a patch of that well-trod ground by offering a fresh take on characters and conventions, and compelling interest with shrewd, sympathy-inspiring storytelling. In short, The Motel signals the arrival of a singularly talented filmmaker.

Newcomer Jeffrey Chyau impresses with an unaffected yet engagingly expressive performance as 13-year-old Ernest, an overweight daydreamer and budding writer who lives with his cranky mother (Jade Wu), annoying kid sister (Alexis Chang) and ancient grandfather (Stephen Chen) in their family-run motor inn. Ever since his father abandoned them, Ernest has shouldered most of the everyday maintenance responsibilities. Which means that, each day after school, he gets graphic lessons in the seedier aspects of life while cleaning rent-by-the-hour rooms used mostly for illicit trysts.

Working from the novel Waylaid by Ed Lin, Kang emphasizes character detail over plot development, so that the loose-knit narrative evolves as a steady accumulation of sharply-observed, vividly-rendered details. When he isn’t avoiding the bellicose son of long-term residents -- a family even more dysfunctional than his own -- Ernest nurses a crush on Christine (Samantha Futerman), a slightly older teen waitress at nearby Chinese restaurant. Although Christine wants to remain “just friends,” she offers sincere congratulations when Ernest wins “honorable mention” in a local essay contest. But Ernest’s mother is far less supportive – she cruelly mocks her son for his literary ambitions, venting pent-up rage she feels over being abandoned by her husband.

Much of Motel pivots on the budding friendship between Ernest and Sam, a smooth-talking, sharp-dressing Korean-American twentysomething who checks into the motel for a quickie with a hooker, then remains as a long-term renter. Sam, charismatically played by Sung Kang (Better Luck Tomorrow), apparently views his stay at the seedy inn as a self-imposed exile in the wake of a messy break-up with his girlfriend. For all his bad habits – or, more likely, because of them – this obvious ne’er-do-well becomes a surrogate big brother for Ernest, imparting dubious wisdom while trying to prepare the fatherless adolescent for manhood. Not surprisingly, life lessons are taken to heart, with mixed results.

Taking his cue from Francois Truffaut, his most obvious influence, Kang refrains from making any character an out-and-out villain. Even the bully who torments Ernest is as much a victim as a victimizer. And Ernest’s mother, though embittered and often shrewish, has ample reason for her rancor. (Of course, it helps a lot that Jade Wu gives the role enough complexity to prevent the character from curdling into caricature.) But be forewarned: When she berates her son for wanting to tell stories – which, in her mind, is tantamount to lying – more than a few writers in the audience (and not just children of tradition-bound immigrant parents) will wince while remembering similar childhood experiences with disapproving parents.

BTW: The Motel continues to appear in sporadic theatrical release throughout the US marketplace -- it opens Friday in Portland, Oregon -- before its Jan. 30 DVD release. No matter what size screen you get to see it on, you'd do well to check into The Motel.
Posted by Joe Leydon at 11/28/2006 04:13:00 PM