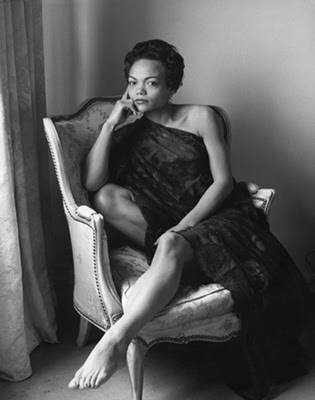 I made a big mistake several years ago when I tried to match Nick Nolte drink for drink during a luncheon interview. (He walked away from the table; I staggered.) And I made an even bigger mistake during my college years when I tried to keep up with my father during a long night of bar-hopping. But it wasn’t until I interviewed Eartha Kitt at the 1982 Toronto Film Festival that I learned what a wuss I truly am when it comes to serious imbibing.


The sleek and sexy singer-actress was at the festival to promote All By Myself, a biographical documentary about her, and I was invited by a festival press rep to interview her in her swanky hotel suite. So here’s the picture: Eartha Kitt is seated on a plush couch, providing me with a generous view her shapely gams while I sit cross-legged on a cushion on the floor. Between us is a coffee table where, just as I sit down, a room service attendant places a tray with four filled-to-the-brim brandy snifters. Trouble is, Ms. Kitt doesn’t think the glasses are big enough. The attendant apologizes, and offers to take the tray away and return with bigger, fuller glasses. In that trademark voice of her, that insinuating purr that could drive even Batman batty, Ms. Kitt replies: “Oh. No. We’ll drink these. But they are much too small. Please bring us some more right away.”

The attendant quickly vanishes, leaving Ms. Kitt and I alone to start our conversation. And, yes, to start drinking. Very soon, the room service attendant returns, bearing four considerably larger glasses with considerably more brandy. Ms. Kitt signs the check – and asks for a third round even before we start on the second.

I lost track of how many times the attendant came and went that afternoon. In fact, to be totally honest, I can’t remember much of what Miss Kitt and I chatted about. (Somewhere along the line during the last quarter-century, alas, I misplaced the audio tape of our conversation.) But I do recall that when the festival press rep showed up to usher in another interviewer, he had to physically lift me off the floor, hold me steady as I left the room – I may have kissed Ms. Kitt’s hand on the way out, but I can’t be certain – and direct me to an elevator so I could retreat to my (much smaller) room on another floor of the hotel.


And here’s the really embarrassing part: While greeting her next visitor, Ms. Kitt spoke, laughed and generally comported herself like someone who had spent the previous hour drinking nothing more intoxicating than iced tea. Even though she’d already had a brandy or two before I arrived, and knocked back more than I did while I was there.


I have dined out on this story for years and years. Indeed, by sheer coincidence, I told the tale again just this afternoon at a family gathering, hours before learning of Ms. Kitt’s demise. And now, as I type this, I have within easy reach a glass of wine – sorry, no brandy in the house – with which I plan to toast the great lady who entertained so many of us for so many years. And who taught me an invaluable lesson – one I don’t always heed, I’ll admit – about recognizing my limitations.
Posted by Joe Leydon at 12/25/2008 09:40:00 PM

She will be missed.