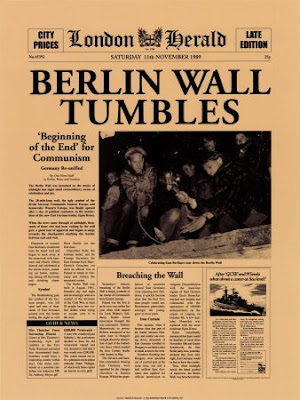 According to Reuters, the 2009 Berlin Film Festival -- set to unspool Feb. 5-15, 2009 -- "will celebrate the 20th anniversary of the fall of the Berlin Wall with a series of films from both sides of the Iron Curtain in the last decade of the Cold War." Think about that for a second. Twentieth anniversary. Twenty years. Two freakin' decades.

All of which leads a 56-year-old fossil like myself to wonder: Just how many of my college students -- hell, how many people who voted in the last U.S. Presidential election -- have no living memory of the Soviet Union? And does this lack of experiential knowledge make them any more or less optimistic than the rest of us when it comes to contemplating the current state of the world?
Posted by Joe Leydon at 12/03/2008 10:40:00 AM