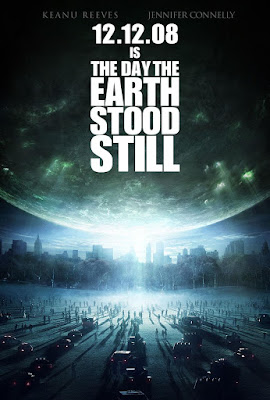 The muddled remake of The Day the Earth Stood Still is pretty lousy – you can read my Houston Chronicle review here – but I must I admit that, while enduring a press screening earlier this week, I found myself fascinated each time Kathy Bates appeared on screen as an aggressively authoritative U.S. Secretary of Defense. Throughout this lavish but lumbering “reinvention” (yeah, right) of the 1951 sci-fi classic, Bates’ Sec. Regina Jackson more or less single-handedly commands all branches of the U.S. military (and the combined police departments of, oh, I dunno, maybe three or four states) in an all-out campaign to kill or capture the stolid extraterrestrial (played, stolidly, by Keanu Reeves) who’s threatening to save the Earth by annihilating earthlings. It’s not that Bates gives such a great performance. (Chalk it up as just another grab-the-paycheck turn by another under-employed Oscar-winner.) But I couldn’t help wondering: Why is the Defense Secretary giving all the orders while the unseen President and Vice-President hide out in undisclosed locations?

For that matter, why did another Defense Secretary (played by Jon Voight, another slumming Oscar-winner) have to take charge of defending the planet while an unseen (and, evidently, incompetent) U.S. President remain on the sidelines last year in Transformers? Did the filmmakers responsible for both these popcorn flicks assume that, at this particular point in our country’s history, audiences simply wouldn’t believe that a Chief Executive could really be an efficient Commander in Chief? Is this something else for which we can blame the incredibly unpopular lame duck currently nesting in the White House?

It wasn’t always like this, you understand. As recently as 1996, the charismatic POTUS in Independence Day played by Bill Pullman earned audience cheers with an impassioned call to arms – a rallying oration not unlike the St. Crispin’s Day speech in Shakespeare’s Henry V – before personally leading the last-ditch fighter-jet assault against alien invaders. But, then again, maybe folks found it easier to believe in a competent Chief Executive twelve years ago. Or ten years ago, when, in Deep Impact, a reassuring African-American prez (Morgan Freeman) kept hope alive even while a humongous meteor bore down on our planet.

All of which makes me wonder: Who’ll be leading the best and brightest of humankind against extraterrestrial terrors in movies made during the Obama Administration? Don’t laugh: Even the most fantastical of popcorn flicks make at least a token effort at credibility. And even the most (seemingly) apolitical of pop-culture trifles often can tell you a lot about the attitudes and assumptions of mass audiences at the time those trifles are pitched at the ticketbuying public.
Posted by Joe Leydon at 12/11/2008 09:33:00 PM

Your review is quoted in the LA Times !

- A former student and reader of your blog :)

Oh, here's the link to the article:
http://latimesblogs.latimes.com/the_big_picture/2008/12/20th-century-fo.html

The Independence Day speech earned jeers rather than cheers at my theatre, but that must have been because we were all Canadians. :)

It is also worth considering how movie presidents like Pullman and the Harrison Ford character in Air Force One represented fantasy presidents who talked tough and took decisive action, unlike the try-to-please-everybody waffling that Clinton was famous for.

And then there are the presidents of that era who were implicated in murder and attempts to cover it up, such as the Gene Hackman character in Absolute Power.

But then there were the good-guy presidents who just wanted to fall in love and fight off the Republican villains, like the Michael Douglas character in The American President.

So the Clinton presidency was marked by a profuse interest in onscreen presidents, but of no one particular stripe. Some were pro-president and some were anti-, and some reflected what people thought of Clinton while others offered fantasy alternatives.

But if the past eight years have seen only one kind of president, in contrast to the diversity of the previous decade -- or if they have kept him off-screen altogether -- then yeah, that is pretty interesting. (BTW, in addition to the Defense Secretaries who seem to be calling all the shots in Transformers and TDtESS, think also of the vice-president in The Day After Tomorrow; did we even see the president in that one?)

And speaking of timely subtexts, your post reminds me of the Harper's Index for September 1996, which stated: "Number of Hollywood movies released since last October in which a fictional U.S. president is one of the characters: 4. Number of these in which the first lady is already dead or is killed in the movie: 3."