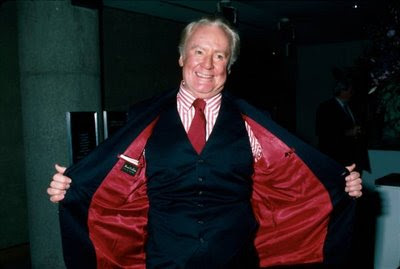 Van Johnson enjoyed a long run as an MGM contract player during the heyday of the Hollywood studio system, more or less defining the term “heartthrob” while playing a series of affable boy-next-door types in movies as diverse as A Guy Named Joe (1943) and In the Good Old Summertime (1949). Later, he made an even more memorable impact as an idealistic Naval officer who removes a paranoid Humphrey Bogart from command in The Caine Mutiny, and a glad-handing millionaire car dealer who nearly woos Debbie Reynolds away from Dick Van Dyke in Divorce American Style (1967).

Like many actors of his generation, he aged gracefully while availing himself of the employment opportunities open to Old Hollywood luminaries – a dinner theater gig here, a TV guest spot there – during the ‘70s and ‘80s. (I don’t have to tell you that he guest-starred on The Love Boat, Fantasy Island and Murder, She Wrote, do I?) Along the way, he worked for everyone from Frank Capra (State of the Union, 1948) to Woody Allen (The Purple Rose of Cairo, 1985), and comported himself with the sort of charismatic professionalism that contemporary actors might do well to study and emulate.
Was Van Johnson a great actor? Well, he gave a few great performances. And I’m sure millions of moviegoers over the years would say they had a great time with many of his movies. Chalk up his passing, at age 92, as one more melancholy severing of our ties to a time when movies were magic, and even secondary stars seemed larger the life.
Posted by Joe Leydon at 12/13/2008 01:04:00 AM