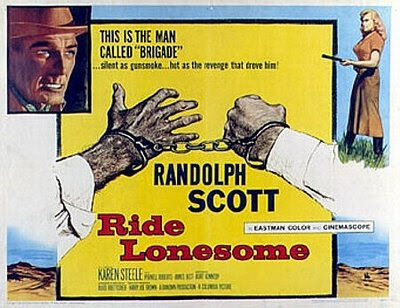 For your Friday viewing pleasure, Turner Classic Movies has programmed a terrific double bill of classic Westerns starring Randolph Scott and directed by Budd Boetticher: The Tall T (8 pm EST) and Ride Lonesome (9:30 pm).
In Tall T (1957), ramrod-turned-rancher Pat Brennan (Scott) and copper mine heiress Doretta Mims (Maureen O'Sullivan) are held captive by a sly stagecoach bandit (Richard Boone) and his thick-witted cohorts, while Doretta's cowardly husband seeks a ransom from his wife's wealthy father. A nice touch: The bandit refrains from killing Brennan primarily because he's desperate for intelligent conversation. But their budding friendship is soured by the bandit's determination to start a new, more respectable life with the ransom money.
Ride Lonesome (1959) -- arguably the best of the Scott-Boetticher collaborations -- finds bounty hunter Ben Brigade (Scott) bringing a captured outlaw (James Best) across Indian territory. Two semi-reformed bandits (a pre-Bonanza Pernell Roberts, whose cocky preening suggests a Wild West version of WWE's The Rock, and a callow James Coburn) want to wrest control of Brigade's captive in order to claim an amnesty offered for their past crimes. But Brigade isn't interested in amnesty, or even a reward. Rather, he wants to lure the outlaw's older brother (Lee Van Cleef) into a forced feeding of just desserts.
Martin Scoresse, an ardent admirer of Boetticher's work, talks about The Tall T here, and Ride Lonesome here.
Posted by Joe Leydon at 1/02/2009 11:53:00 AM

Joe, thanks for posting this. I watched THE TALL T for the first time on Turner this month, and now I am nabbing all the Budd Boetticher films I can from Netflix. These are great stories and I'm really enjoying them!