Now showing at a Blockbuster near you 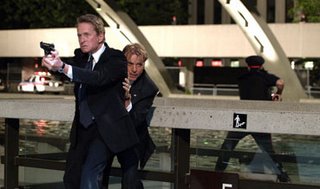 You always run the risk of damning a movie with faint praise when you start flinging around adjectives like “solid,” “efficient” and – really, I swear to God, I mean this as a compliment – “well-crafted.” But those are precisely the words that spring to my mind as I consider The Sentinel, a crackerjack thriller that opened in megaplexes last spring, and arrives on homevideo this week.

Michael Douglas brings his trademark clenched intensity to the lead role of Pete Garrison, a veteran Secret Service agent who’s still steamed because he wasn’t able to keep Ronald Reagan out of the line of fire back in 1981. Not surprisingly, he’s obsessed with being the best human shield he can be, so that no Commander in Chief will ever again bite the bullet on his watch. For all his dedication, however, Garrison isn’t exactly a paragon of professionalism – he’s having an affair with the very lovely First Lady (Kim Basinger), which strikes me as, at the very least, a bad career move. Worse, his inappropriate mixing of pleasure with business makes him an easy mark for bad guys who want to frame him as an attention-diverting fall guy during a hunt for would-be Presidential assassins. Bad news: Garrison is perceived as a prime suspect by the equally intense David Breckinridge (Kiefer Sutherland, still radiating his 24 vibe), one of the Secret Service’s top investigators. Worse news: Breckinridge, formerly Garrison’s best buddy, has more than ample reason (or so he believes) to nail our beleaguered hero for something, anything, everything.

I’m going to go way out on a limb here and assume you won’t be surprised to learn that Garrison manages to avoid arrest, so that he can single-handedly set out to clear his name while, oh, I dunno, maybe a thousand or so cops, feds, Secret Service agents and National Guardsmen try to track him down. (OK, I’m exaggerating. A little.) The Sentinel – adapted by scriptwriter George Nolfi from a novel by Gerard Petievich – is a fairly formulaic hunter-becomes-hunted-becomes-hunter-again scenario, complete with high-speed pursuits, hairbreadth escapes and beat-the-clock showdowns. But suspense is sustained with undeniable skill, and the slick proficiency of the entire enterprise is mightily impressive. Credit the game efforts of a splendid cast – Eva Longoria, Martin Donovan and David Rasche figure prominently among the supporting players – and the confident direction of Clark Johnson (S.W.A.T.), an actor-turned-filmmaker who obviously understands that even a by-the-numbers project can add up to something special if you calculate smartly enough.
Posted by Joe Leydon at 8/28/2006 10:19:00 PM

Hi again... The way you discribe this movie I am now glad I have it in my Netflix Q.

Another movie I just watched that blew me away was The Inside Man. Finally Spike hit one out of the park without resorting to his soapbox and getting all political.

I hope this one does too... though I don't expect it to be on Inside Man's level of filmmaking.