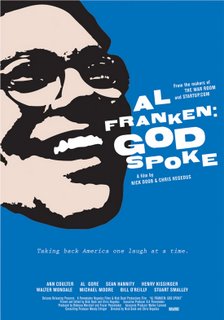 Anthony Kaufman reports on Indiewire.com that one of the funniest scenes in the very funny Al Franken: God Spoke -- the Chris Hegedus-Nick Doob documentary that world-premiered last spring in Austin at the SXSW Film Festival -- will be slightly but significantly shortened before it kicks off a theatrical run Sept. 13 in New York. Specifically: According to Kaufman, the producers trimmed an excerpt from a 2004 debate between liberal gadfly Franken and conservative succubus Ann Coulter at the prestigious Connecticut Forum. Even more specifically: When moderator Steve Roberts "asks the nemeses which historical figure they would [like to] be," Kaufman writes, "Coulter says she'd be Franklin D. Roosevelt so she could prevent the New Deal. Franken says he'd be Hitler so he could prevent a little thing called 'The Holocaust.' Point: Franklin. "

So how come the scene now lies on the cutting-room floor? Kaufman surmises that Coulter refused to sign a release that would allow its inclusion in the theatrical-release version of the doc because Franken makes her look so ridiculous during the exchange. And, I must admit, it's easy to buy that scenario, considering that Coulter is... well, as David Letterman warned us, an evil, crazy bitch. But let's get real here, folks: Why would Coulter start worrying about her image at this late date? Isn't she, after all, someone who has based her entire career on the notion that there's no such thing as bad publicity? Under normal circumstances, I would not pass by an opportunity to dis this harpy. But could it be that maybe, just maybe, Steve Roberts is the one who refused to sign a release? (Trust me: He comes off as a major jerk while cavalierly dismissing the late Sen. Paul Wellstone -- an idol of fellow Minnesotan Al Franklin -- as an "unimportant" politico.) Or maybe the Connecticut Forum folks decided they didn't want their paid-admission event being sampled by outsiders.

In any event, whoever caused the scene to be clipped is living in a fool's paradise. Why? Because ever since last march, when Al Franken: God Spoke began its tour through the festival circuit, publicists have sent DVD screeners of the film -- complete with the now-deleted scene -- to critics and journalists all across this great land of ours. (I've watched my copy twice since reviewing the film at SXSW.) Just how long do you think it will be before the excised footage makes its way to YouTube.com? Let's see: If it's Tuesday night now, maybe by Wednesday....?

FOLLOW UP: OK, so maybe Coulter really is the weenie here. All the more reason for someone to leak the missing footage to YouTube.
Posted by Joe Leydon at 8/29/2006 09:53:00 PM

I hope you'll post a link when that shows up on YouTube!
(By the way, I love the desciption of Ann Coulter as a "conservative succubus.")