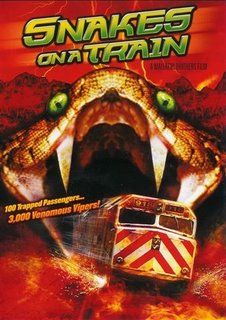 From the same folks who last year gave us H.G. Wells' War of the Worlds -- the C. Thomas Howell vidpic, not the Steven Spielberg blockbuster -- we now get Snakes on a Train, another low-budget, high-concept quickie aimed at riding the coattails of a bigger and pricier pic. (I don't have to tell you what movie they're ripping off this time, do I?) Unfortunately, neither undiscriminating action fans nor connoisseurs of high camp will find much bite in this latest direct-to-video product from The Asylum, an outfit that specializes in cheap knock-offs of more upscale megaplex fare. (The Da Vinci Treasure and Pirates of Treasure Island are other recent additions to the company's catalogue.) Maybe SOAT was intended as a tongue-in-cheeky goof. But as Huey Lewis and the News sagely noted: Sometimes, bad is just bad.

Working from a brazenly absurd yet tediously unamusing script by Eric Forsberg, fraternal auteurs identified only as The Mallachi Brothers offer an unappetizing smorgasbord of stiff performances, klutzy continuity, transparently fake gore and slapdash special effects. Worse, the vidpic is so numbingly dull throughout its first two-thirds that most viewers won’t even bother to hit the pause button during refrigerator raids or bathroom breaks.

The plot involves an unfortunate Mexican beauty (Ryanne Ruiz) who’s been smacked with a Mayan curse that causes her to chronically upchuck snakes. Her attentive husband (Alby Castro) smuggles her across the border into Texas, where they stowaway aboard a train bound for Los Angeles (where, apparently, it’s much easier to find a top-notch Mayan curse dispeller). During the journey, however, the regurgitated snakes just keep getting bigger and bigger, hungrier and hungrier, much to the increasing discomfort of the other passengers. Nothing good comes of this.

In the event you want to know more, my Variety review is available here. As for myself, I can't help wondering whether the Minutemen might try to use SOAT for fundraiser screenings. I mean, gee whiz, what better tool could they use to demonstrate the dangers of an unprotected U.S.-Mexico border?
Posted by Joe Leydon at 8/18/2006 05:29:00 PM