"Snakes" on a blog 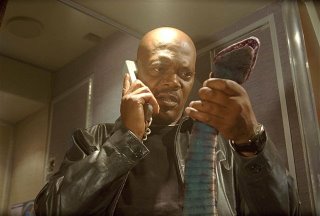 And so, after six months of fanboy-fueled, Internet-inflamed hype, we finally get… well, a pretty damn good rock-the-house, go-for-broke action flick. No kidding: Snakes on a Plane has the style and swagger of a down-to-earth, meat-and-potatoes B-movie of 30 years ago. (Indeed, it’s easy for me to imagine watching it on a double bill with John Singleton’s similarly retro Four Brothers at the Skyview Drive-In in New Orleans around 1974 or thereabouts.) But its easy-to-encapsulate high-concept plot (dead solid perfect for a TV Guide blurb) and unpretentious fealty to genre conventions remind me more of those 90-minute Movies of the Week that ABC churned out relentlessly during the same decade. Of course, I don’t recall any of those TV-movies featuring a scene similar to the one in SOAP where a randy couple is rudely interrupted by a venomous viper while they earn their membership in the Mile High Club. (Nor do I remember anyone in a ’70s telefilm losing his one-eyed trouser snake to a famished reptile, as happens to a hapless bit player here.) And while TV-movie vets Darren McGavin and Robert Culp often impressed as hard-ass heroes back in the day, neither of them ever got to rant and rave about “these motherfuckin’ snakes on this motherfuckin’ plane!”

Samuel L. Jackson gets to do those honors in SOAP. And judging from the way his outburst is less-than-seamlessly edited into the action, it’s easy to believe the rumors that this scene – along with the above-mentioned naughty bits, and many of the more graphically violent snake attacks – were after-the-fact additions aimed at upping the ante from PG-13 to R. But so what? The rough edges -- much like the predictable plotting, the shameless stereotypes and the deliberately cheesy special effects – are part of the down-and-dirty, blast-from-the-past fun.

Jackson blowtorches his way through the film with his trademark aplomb as Special Agent Flynn, an FBI operative charged with protecting a murder witness (Nathan Phillips) from the paid assassins of a sadistic crimelord during a Honolulu-to-Los Angeles redeye flight. Unfortunately, the crimelord has his minions slip into the baggage hold and plant – well, shoot, go back and look at the title, OK? Besides, you don’t need no stinkin’ plot synopsis: Writers John Heffernan and David Loucka haven’t written a script, they’ve merely provided bulletpoints, enabling director David Ellis to methodically tick items off a list of clichés. The flight crew includes a stewardess (Julianna Margulies) who’s taking her “last flight” before early retirement? Check. A mother with a tiny baby is threatened (but, of course, not killed) by a snake? Ditto. Two small children are endangered by a humongous cobra? Got it. An untrained civilian must take control of the cockpit when the pilots are incapacitated? Done.

Rather than try to transcend his pulpy material, or gussy it up with flash and filigree, Ellis prefers to do it Old School style: He puts the pedal to the metal and keeps his movie moving faster than the speed of thought. Is Snakes on a Plane laughable? Quite often. (To indicate a snake’s p.o.v., the director employs what David Letterman might call a Reptile-Cam approach: He wraps the lens in what appears to be greenish cellophane.) Is it entertaining? More than enough to qualify as a guilty pleasure that greatly amuses by living down to its hype.
Posted by Joe Leydon at 8/18/2006 01:51:00 AM

As the snakes were approaching their first victim - the cat in cargo - the crowd was chanting: SNAKES, SNAKES, SNAKES ... great audience effects, they were hissing during the slow dialogue parts ... best one-liners were spoken by the pilot: "This plane is going down faster than a Thai whore." Of course Sam Jackson had the memorable: "Great, Snakes on Crack."

OK, Joe, that was pretty awesome. I'm glad you liked it. You're the man with writing chops, this one's from someone without, who takes the imagine you're stranded with cheese approach...

Glad to hear that, at least for you, this one lived to the amazing hype .. I wanna see this motherf*cking movie right now! (but I'll have to wait until tomorrow, darn it!