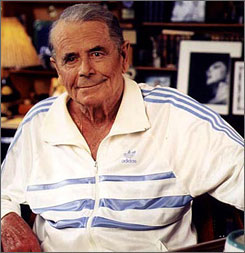 Glenn Ford, one of the last of the Old Hollywood professionals, died today at age 90. He was a journeyman actor of the finest kind, working in an impressive array of genres: Everything from gritty Westerns (Budd Boetticher's The Man from the Alamo, Delmer Daves' 3:10 to Yuma) to hardboiled film noir (Charles Vidor's Gilda, Fritz Lang's The Big Heat), from family-friendly comedies (Frank Capra's Pocketful of Miracles, Vincente Minnelli's The Courtship of Eddie's Father ) to edge-of-your-seat thrillers (Alex Segal's Ransom! -- yep, the original version of the flick remade by Ron Howard with Mel Gibson -- and Blake Edwards' Experiment in Terror). Not incidentally, he also was Clark Kent's adoptive father in Richard Donner's Superman: The Movie (1978). My favorite of his many first-rate performances: His chronically boozy, increasingly desperate small-town doctor who fears he has contracted rabies in a remote desert community, and who's repeatedly detoured by distractions (like the va-va-voom Stella Stevens) while on the road to seeking aid, in Gilberto Gazcon's Rage (1966). If you're familiar with Ford's work, you'll know what a reliable but under-rated craftsman he was. If you're not familiar with his work, well, you should be.
Posted by Joe Leydon at 8/30/2006 10:48:00 PM

A class act, a classy actor. Sorry to see him go.

When I was a kid growing up in Cape Town, I had a movie board game, in which one worked your way up to "stardom". The board tokens were pictures of stars of the period. I always chose to be Glenn Ford ... and I almost always won! (it was MY game, after all!) He was class act as an actor, but, like so many of his generation, he became very conservative, and outspoken, in his political leanings in his later years.

thanks for your tribute to glenn ford.

my favorite film of his is "gilda." he and rita hayworth had great chemistry.

i also like "experiment in terror" but i haven't seen this film come on television in decades. i'd like to see it again.