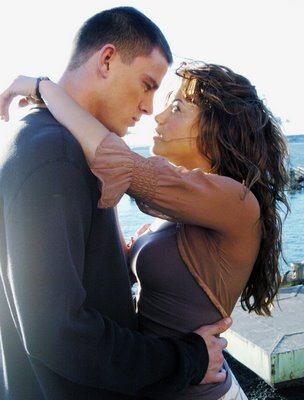 Although I’m at least a decade or two (or three or four) beyond the target demographic for Step Up – a teen-skewing hip-hop urban fantasy about attractive opposites who become complementary dance partners – I was pleasantly surprised by the movie’s wall-to-wall charm and highly contagious exuberance. (And lest any of you accuse me of being too taken by the barely-legal allure of lead player Jenna Dewan, let me hasten to note that I was too busy gazing at co-star Rachel Griffiths – who plays Ms. Dewan’s school principal, OK?-- to be hormonally inflamed by a mere child.) But I must admit: Even I never expected it to be the top-grossing film in North America on opening day (Aug. 11). True enough, I almost posted the following prediction on David Poland’s Hot Blog: “Don’t be surprised if Step Up is more popular with ticketbuyers than tracking surveys indicate.” But you know what? I wimped out, and didn’t make the post. The moral? No guts, no glory.
Posted by Joe Leydon at 8/12/2006 09:38:00 PM

This kind of movie has been done over and over again. But there's a reason for that: It has a lot of appeal. And it has a lot of appeal on a lot of levels. There's the overcoming-the-odds aspect, the unlikely romance, and if all else fails, there's still the dancing.

Heck, I saw the trailer and it made me want to see the film. A guilty pleasure is still a pleasure, after all.