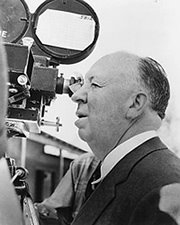 More than 26 years after his death, Alfred Hitchcock continues to entertain us, and occasionally astonish us. But that doesn’t mean he ever really liked us. Indeed, there is ample evidence to the contrary – which, all things considered, might not be such a bad thing. Francois Truffaut, who famously interviewed and occasionally emulated the Master of Suspense, once spoke of his idol as “the man whom we are glad to be despised by.” And, mind you, Truffaut meant that as a compliment.

It’s important to remember that, throughout his life, Hitchcock never tired of manipulating our ambivalent responses to violent death. In doing so, he shamelessly pandered to our baser instincts, implicating us in the machinations of his characters by exploiting our voyeuristic impulses. Thanks to him, we really want James Stewart to be right when thinks he witnessed a murder in Rear Window (1954). We really want Farley Granger’s slatternly estranged wife to get what’s coming to her in Strangers on a Train (1951). And we really, really want Anthony Perkins to dispose of that car with the bloody corpse inside the trunk in the swamp behind the Bates Motel in Psycho (1960).

As early as Blackmail (1929), his first talking picture, Hitchcock was indulging in devious sleight-of-hand to make moviegoers share the guilty pleasure – and the not-so-pleasurable guilt – of being, in essence, accomplices to crime. A reckless young woman abandons her policeman boyfriend for a night on the town with a seductive artist. The artist lures her into his apartment – truth to tell, he doesn’t have to do much to convince her – and tries to rape her. She responds by stabbing him to death, then taking flight. The next morning, however, she’s so conscience-stricken that, at the breakfast table, she jumps at each mention of cutlery. Hitchcock intensifies the tension by playing tricks with the soundtrack, so that we, like the young woman, recognize only one word -- knife – amid an otherwise barely audible murmur.

A few years later, in Sabotage (1936), Hitchcock mercilessly sustained a sequence of almost unbearable suspense by following a little boy aboard a bus as he unwittingly transports a package containing a bomb. Just when we’re almost ready to assume that, hey, Hitch really had us going there for a few minutes – ka-boom! The bomb explodes, the boy is killed – and his older sister (Sylvia Sidney) is sufficiently motivated to stick a large knife into the saboteur (Oscar Homolka) who just happens to be her husband.

But rest assured: She doesn’t do it nearly fast enough to satiate the audience’s bloodlust.

Do we blame Hitchcock for bringing out the worst in us? Quite the contrary: We’re greatly amused, and grateful, for being so effectively worked over. And yet, when you remember the haughtily droll host who quipped his way through countless interviews, promotional shorts and wrap-around segments for his long-running TV series, you may find yourself reading something like contempt in his insolent smirk. Something like the regard of a seasoned prostitute for her most eager customers.

Still, diehard Hitchcockians (and I count myself among that number) will want to set aside several hours this weekend to watch the Encore Mystery cable network during its ongoing marathon of Hitchcock classics, timed to celebrate the master’s Aug. 13, 1899 birth date. The lineup runs the gamut from his early British career (The Lady Vanishes) to his final Hollywood production (the criminally under-rated Family Plot), and includes masterworks as Psycho, Vertigo, Rebecca, Shadow of a Doubt — and, best of all, my all-time Hitchcock fave, Notorious. Enjoy.

Thanks for the heads-up! I will be checking my local TV listings.

As a child, my mind was warped by watching Hitchcock's TV series. It was further warped as an adult by watching his films. I might as well catch a few of the films I missed and complete the process!