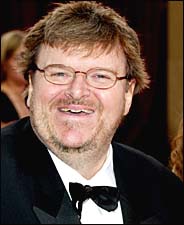 Because of a cash flow problem -- i.e., not enough cash flowing into my wallet -- I won't be able to attend the Toronto Film Festival this year. Bummer. I regret not being able to catch the premieres of several promising films. But I'm especially regretful when I hear that Michael Moore will be previewing segments from not just one but two of his upcoming films. The great thing about Moore is that, whatever you think about his movies, he always manages to piss off people you want to see pissed off.
Posted by Joe Leydon at 8/25/2006 09:45:00 PM

Can't believe Variety didn't fork some money over so you could go to the film festival. With the weakening of the US dollar and the steep rise in ticket prices over the last 10 years, I can understand money being a concern.
I haven't gone in 3 years. Last year, Rogers Cable had 24 hour streaming coverage of the festival on their web site. I almost felt like I was back at the hotel in Toronto after a long day of seeing films watching the TV. I hope they do it again this year.