Coming soon (but not staying long) 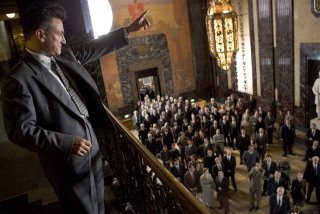 According to the usually reliable ComingSoon.net site, All the King's Men -- Steve Zaillian's remake of the Oscar-winning drama based on Robert Penn Warren's Pulitzer Prize-winning novel -- will be available as a homevideo release on Dec. 19. What makes this just a tiny bit remarkable is the fact that the film -- originally set for release in 2005, when it was hyped as a major Academy Award contender -- will open at theaters and drive-ins everywhere Sept. 22. That's right: A high-profile, major studio release that once seemed like sure-fire Oscar bait, with a cast that includes such notables as Sean Penn (as the Huey Longish politico who's corrupted by power), Jude Law, Anthony Hopkins and James Gandolfini -- this seemingly impressive package will fast-forward to DVD less than three months after its opening weekend. All of which raises the inevitable question: What is wrong with this picture?
Posted by Joe Leydon at 8/24/2006 05:58:00 PM

I don't see that information on your ComingSoon link. I think either you are mistaken, or the Dec 19 DVD release date was projected from ATKM's previous expected release date, i.e. last year (Dec 2005).

I'm only reporting what the usually reliable website reports. If there's a correction on the site, I'll announce it.